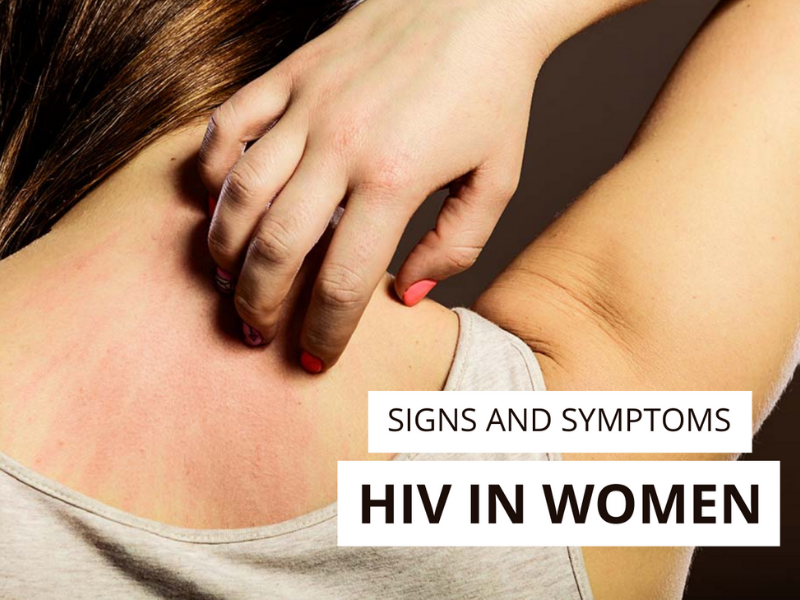 The symptoms for HIV is similar for both men and women, however, there are some signs and symptoms that are specific to women alone and usually occur in either the early or later stages of infection. To find out more about HIV and its specific symptoms for men or women, visit your nearest sexual health clinic.

This is also known as acute seroconversion and is the first of the three stages of HIV immediately after exposure to the virus. During this first stage, defensive antibodies are produced by the immune system to help in the fight against the virus and subdue the infection.  The acute seroconversion phase lasts for 7 to 14 days, and during this phase, people who are infected may begin to experience symptoms that are referred to as acute retroviral symptoms or ARS. These symptoms are just like the flu symptoms and can include mild fever, body ache, rash and swollen lymph nodes.

This does not only confer to the higher rate of infection among women but also in the faster progression of the disease. According to a journal reviewed in 2014, women with HIV have a 1.6 fold greater risk of progressing to AIDS than men.

If there is an accompanying STD infection in addition to the HIV infection, the symptoms of such STD infection will begin to manifest during the acute seroconversion phase. Although studies have suggested that about 1 in 7 people who are infected with HIV are co-infected with a type of STD as at the time of diagnosis, this situation is not entirely uncommon.

In the cases of women with HIV, the most common STDs that accompany it include Chlamydia, gonorrhoea, syphilis and trichomoniasis. Besides being co-infected, having any of these STDs or non-sexually transmitted ones like bacterial vaginosis can increase the chances of a woman getting HIV by 2 or 3 fold. The thing to note is that having these infections will not only undermine the barrier function but will also increase the concentration of immune cells at the site of the infection, which is the cervix. Some of the concentration of immune cells are CD4 T-cells, which are the very cells that are targeted and infected by HIV.

In the case of co-infection, HIV can be identified, not by its own symptoms but by the signs and symptoms of the STD.

For this reason, anyone who seeks diagnosis and treatment of STD should also get tested for HIV as recommended by the CDC.

After the acute seroconversion phase, the HIV virus will have been brought under control by the immune system, and the virus will have established a set point during which viral activity will remain more or less stable for a couple of months or years.

The next stage of infection following the acute phase is the chronic stage and is also referred to as clinical latency. This stage of infection is one in which the infection progressed silently with few or no symptoms. At this point, the virus continues to infect and deplete CD4 T-cells that are relied upon when the body needs an immune response to a trigger. As the CD4 T-cells continue to deplete in quantity, there is an increased risk of opportunistic infections as well as immune suppression. Opportunistic infections are so named because they only infect a weak immune system as a strong immune system would be able to subdue them.

Signs and complications of HIV in women

Chronic HIV infection has the symptoms related more to the development of opportunistic infections than the virus itself. This means that the secondary infections affecting a woman’s health and menstrual cycle usually develop as a result of prolonged immune suppression and chronic inflammation.

Note that CD4 T-cell count of 500 -1,200 cells per cubic millimeter is seen as normal, whereas a cell count of 250 – 500 per cubic millimeter is seen as a sign of immunosuppression. Also note that the types of opportunistic infections seen at a CD4 T-cell count of 250 -500 is more or less the same for both men and women. They include infections like herpes zoster, herpes simplex, bacterial and fungal infections, tuberculosis and HIV related meningitis. The symptoms for women include the following.

Abnormal periods: Menstrual problems like the absence of menstruation (amenorrhea) and irregular menstruation (oligomenorrhea) is experienced more by women who have been infected with HIV. As the CD4 cell count drops, the risk increases. The key risk factors are said to be untreated HIV infection and low body mass index.

Bone problems: Osteoporosis is characterised by bones that break easily, loss of height, back pain and stooped posture. Although women who are in their post-menopausal stage are at an increased risk, those women who are infected with HIV face the risk four times more. Additionally, certain HIV drugs and hepatitis C infection have also been linked to increased bone mineral loss.

Impaired fertility: women with HIV are less able to control the effects of Pelvic Inflammatory Disease (PID) even with the help of treatment. This is as a result of the suppression of the immune system by HIV. For this reason, women who are infected with HIV and also have PID can face serious complications like infertility and ectopic pregnancy. In simple terms, this means that women with HIV suffer complications of PID than women without HIV.

Genital warts: Genital warts are commonly linked to Human Papillomavirus (HPV) and are also known as condylomas. Studies have shown that women with HIV are at greater risk of having HPV than those without HIV. This, in turn, increases the risk of cervical cancer.

Recurrent yeast infection: vaginal candidiasis is a condition that results from the overgrowth of a fungus called candida. The decline of the CD4 cells also leads to the frequency and severity of the yeast infection. This yeast infection is the counterpart to the one experienced by both men and women called oral thrush.

This is the third stage of the HIV infection and is characterised by symptomatic disease. All the immune defenses have been wiped out at this stage, leaving you in an immunocompromised state. Also, at this point, you are vulnerable to common and uncommon illnesses because your immune defences are low. Without the means of protection, you run the risk of having life-threatening illnesses which include infections and even cancer.

According to CDC, when you have the following, then you must have progressed to AIDS;

AIDS-defining conditions are those diseases that are rarely seen outside of immunocompromised people, and include common opportunistic infections that have spread from their typical sites of infection.

Symptoms of aids in women

There is little variation between symptoms of AIDS in men and women. The variations are simply evidence that shows that women experience more significant cognitive decline and are more likely to experience signs of HIV encephalopathy (AIDS dementia complex) than men.

Invasive cervical cancer is one AIDS-defining condition that is exclusive to women. It is an advanced stage of cervical cancer whereby the cancerous cells have spread to the tissue in the deeper part of the cervix or other parts of the body. Note that ICC can affect women with HIV as well as women without. However, the risk is about 7 times greater for women with HIV.

Several non-HIV-related conditions are commonly seen in people who have a long term infection. These conditions include cancers as well as diseases related to ageing that often develop 10 -15 years earlier in people with HIV.

The key to living longer, even with HIV, is early diagnosis and treatment. In the absence of a cure, HIV patients, especially women, can live as long and as healthy as possible.

Find out all you need to know about HIV when you visit this website.