The man regarded as the “father of Pakistan’s nuclear bomb”, Dr. Abdul Qadeer Khan, has died aged 85 after being hospitalized with Covid-19.

Dr. Khan was hailed as a national hero for transforming his country into the world’s first Islamic nuclear power.

But he was also notorious for having smuggled nuclear secrets to states including North Korea and Iran.

“He was loved by our nation be(a use) of his critical contribution in making us a nuclear weapon state,” the prime minister tweeted.

Known as AQ Khan, the scientist was instrumental in setting up Pakistan’s first nuclear enrichment plant at Kahuta near Islamabad. By 1998, the country had conducted its first nuclear tests.

But he was arrested in 2004 for illegally sharing nuclear technology with Iran, Libya and North Korea.

The revelations that he passed on nuclear secrets to other countries shocked Pakistan.

In a televised address, Dr. Khan offered his “deepest regrets and unqualified apologies”.

Dr. Khan was pardoned by Pakistan’s then-president, Pervez Musharraf, but he was held under house arrest until 2009.

The leniency of his treatment angered many in the West, where he has been dubbed “the greatest nuclear proliferator of all time”.

But in Pakistan, he remained a symbol of pride for his role in boosting its national security.

“He helped us develop nation-saving nuclear deterrence and a grateful nation will never forget his services,” President Arif Alvi said.

President Dr. Arif Alvi said that he had personally known Dr Khan since 1982. “He helped us develop nation-saving nuclear deterrence, and a grateful nation will never forget his services in this regard,” he said.

Deeply saddened to learn about the passing of Dr. Abdul Qadeer Khan. Had known him personally since 1982.
He helped us develop nation-saving nuclear deterrence, and a grateful nation will never forget his services in this regard. May Allah bless him.

Dr. Abdul Qadeer Khan born 1 April 1936-10 October 2021) NI, HI, FPAS, Deng, known as A. Q. Khan, was a Pakistani nuclear physicist and metallurgical engineer who is colloquially known as the “father of Pakistan’s atomic weapons program”. Though, Khan is celebrated in Pakistan for bringing balance to the South Asian region after India’s nuclear tests; he is also noted for both his scientific ability and his difficult interpersonal relations.

He was among those who migrated to Pakistan in 1947 with their families.

Khan is widely regarded as the “Father of Islamic Nuclear Bomb” or founder of gas-centrifuge enrichment technology for Pakistan’s nuclear deterrent program as he developed the Muslim world’s first atomic bomb.

He acquired his engineering degree from a university in the Netherlands in 1967  and later went on to secure a doctorate in metallurgical engineering from Belgium.

Dr AQ Khan is considered the father of Pakistan’s nuclear program and is revered at home as a hero for building the Muslim world’s first atomic bomb.

Dr Abdul Qadeer Khan’s health started deteriorating Saturday night, after which he was brought to the KRL hospital Sunday morning in an ambulance, at 6:00 am.

Sources said the nuclear scientist experienced discomfort in breathing after which he was brought to the hospital. However, his health took a turn for the worse when his lungs started bleeding.

Doctors tried their best to save the renowned scientist’s life but were unable to do so, resulting in his death at 7:04 am. Doctors have said Dr. Abdul Qadeer Khan passed away as his lungs collapsed.

The hospital administration is trying to make arrangements to shift Dr. Abdul Qadeer Khan’s body to his E-7 residence. His funeral prayers will be offered at the Faisal Mosque in Islamabad at 3:30 pm, said his family.

Speaking to Geo News, Interior Minister Sheikh Rasheed showered praise on the scientist, adding that all necessary arrangements were made to save Dr. Qadeer’s life.

Rasheed confirmed that the government will accord a state funeral to the scientist in recognition of his services for Pakistan.

The interior minister said Dr. Abdul Qadeer Khan had helped him a lot in educational activities, adding that he had remained a visionary leader in times when Pakistan was going through a sensitive time.

“He is indeed the Mohsin-e-Pakistan,” said Rasheed.

Dr Abdul Qadeer Khan became a national hero overnight, not only in Pakistan but in the Islamic world as well, when in May 1998 Pakistan gave a befitting response to India by conducting its nuclear tests.

Following the tests, Pakistan became the sole nuclear power in the Muslim world and the seventh country to possess nuclear weapons. Pakistan’s nuclear weapons have kept Indian aggression in check.

Prime Minister @Imran Khan praised Dr. Abdul Qadeer Khan by saying that he was, for the people of Pakistan, “a national icon”.

Deeply saddened by the passing of Dr A Q Khan. He was loved by our nation bec of his critical contribution in making us a nuclear weapon state. This has provided us security against an aggressive much larger nuclear neighbour. For the people of Pakistan he was a national icon.

“Deeply saddened by the passing of Dr. A Q Khan. He was loved by our nation bec of his critical contribution in making us a nuclear weapon state. 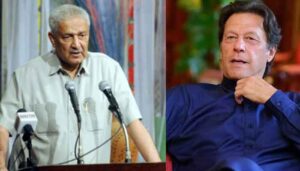 This has provided us security against an aggressive much larger nuclear neighbor. For the people of Pakistan he was a national icon,” he tweeted.

‘A huge loss for Pakistan’

According to a statement issued by the Inter-Services Public Relations (ISPR), Chairman Joint Chiefs of Staff Committee General Nadeem Raza and all services chiefs expressed sorrow over Dr Khan’s passing.

Leader of the Opposition in the National Assembly Shehbaz Sharif said that the nation had lost “a true benefactor who served the motherland with heart and soul.”

“The passing of Dr. Khan is a huge loss for the country. His role in making Pakistan an atomic power remains central,” he said.

Today the nation has lost a true benefactor who served the motherland with heart and soul. The passing of Dr Abdul Qadeer Khan is a huge loss for the country. His role in making Pakistan an atomic power remains central. May Allah shower his blessings on his soul!

Defence Minister Pervez Khattak said he was “deeply grieved” over his passing and called it a “great loss”.

“Pakistan will forever honor his services to the nation! The nation is heavily indebted to him for his contributions in enhancing our defense capabilities,” he said.

إِنَّا لِلّهِ وَإِنَّـا إِلَيْهِ رَاجِعونَ
Deeply grieved at the sad demise of Dr Abdul Qadeer Khan. Great loss! Pakistan will forever honor his services to the nation! Nation is heavily indebted to him for his contributions in enhancing our defence capabilities.

Planning and Development Minister Asad Umar said that Dr. Khan had played an important role in making the country “invincible”. He also offered prayers for the deceased.

Born in 1936 in Bhopal, India, Dr. Khan had immigrated along with his family to Pakistan in 1947 after the partition of the subcontinent.

He did a science degree at Karachi University in 1960, then went on to study metallurgical engineering in Berlin before completing advanced studies in the Netherlands and Belgium.

After learning of India’s nuclear test in 1974, he had joined the nation’s clandestine efforts to develop nuclear power. He had founded the Khan Research Laboratories in 1976 and was its chief scientist and director for many years, according to Radio Pakistan.

He was awarded the Nishan-i-Imtiaz for his services to the country.

In 2004, Dr. Khan was at the center of a massive global nuclear proliferation scandal. In a series of dramatic developments, he was accused by then army chief and president Pervez Musharraf of running a rogue proliferation network for nuclear material.

Shortly after Musharraf’s announcement, a recorded confession by Khan was aired in which he took sole responsibility for all the nuclear proliferation that had been revealed. He was subsequently placed under house arrest.

A court ended his house arrest in February 2009, but his movements were strictly guarded, and he was accompanied by authorities every time he left his home in Islamabad.

Later, he had filed a plea in the Lahore High Court seeking enforcement of his fundamental rights, including free movement. The LHC had rejected the plea in 2019 on the grounds that it lacked jurisdiction in view of special security measures adopted by the state.

He had then moved the Supreme Court against the LHC’s decision, which had asked the attorney general to meet the nuclear scientist and allay his concerns.