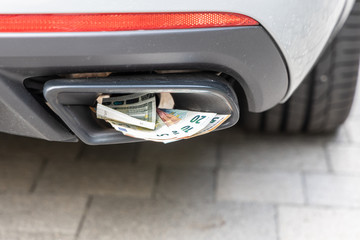 If you are a car owner, you must already be familiar with the DPF (Diesel Particulate Filter) installed in your vehicle. Much like every other mechanical part of the engine, the DPF needs to be serviced after a while. This filter aims to trap diesel particulate matter, known as soot, in the exhaust system. DPS is very beneficial for the environment as it keeps your car’s exhaust from releasing black fumes into the atmosphere. Like all other filters installed in your vehicle, your DPF can start to form a blockage and get clogged up with waste. If your DFP  isn’t working, the first symptom you will see is black smoke coming out of your car’s exhaust pipes. This is an obvious indicator that you need to service your DPF.  A DPF cleaning service will ensure the filter is thoroughly cleaned out while keeping the environment clean.

What is DPF light?

Every car has a few indicators installed that tell the driver when something needs to be serviced. The DPF light monitors the condition of the Diesel Particulate Filter in your car, and in case the filter starts to get clogged, the light will ignite to indicate the issue.

What causes the DPF to become blocked?

Even though the DPF filter in your car prevents polluting gasses from being released from the exhaust, the soot can start depositing on the filter and cause a blockage. Once that happens, and the DPF filter cannot stop the black fumes from being released, your car engine control starts what is called ‘passive regeneration.’ The more fuel you burn, the hotter the exhaust system’s temperature gets. This causes the soot to burn and be expelled out of the exhaust as fine ash. Cars usually start passive regeneration while going at higher speeds as this helps to maintain a high temperature in the vehicle’s exhaust system.

That said, if you drive your car at slow speeds to make short trips around the town and avoid traveling at motorway speed, there are high chances that your car doesn’t enter the regeneration process. This means that the soot keeps on building up with the DPF.

What do you do when you see the DPF light?

The light indicates that the passive regeneration process has been unsuccessful, which means you have to actively regenerate the DPF.  This can be done by driving the car a speed higher than 40mph for about 10 to 15 minutes. This should kickstart the process of passive regeneration by allowing the exhaust to reach a high temperature needed to burn the soot and clear out the filter. It is normal to experience strange sounds coming from the engine and a pungent smell discharging from the car during this process. You may notice a hike in fuel consumption as well. These things should return to normal once the DPF is clean and the DPF light goes out.

While it is okay to drive your car and wait for passive regeneration to clear out your DPF, we highly suggest that you seek the help of a professional when the DPF light illuminates.